Professor Emrys Evans died on 14thJune 2019 and as a great friend and supporter of the Manchester Irish Education Group several committee members attended his funeral in Sale.

Shortly after the group was founded we met professor Emrys Evans who was  a Professor of Celtic Studies at University College of Wales, Aberystwyth but lived in Manchester. He was very supportive and gave us great encouragement in those early days.

He told me he read Welsh as an undergraduate at Swansea University,then went across to Ireland where he studied Irish in Donegal, and later taught in Queens University, Trinity and University College Dublin.

By then he was hooked on Irish, although he did time in the mid 1950’s as an election agent for the Welsh Nationalist in Gower, which involved visiting his candidates every day in jail. He never lost his love of Wales, Welsh culture and Rugby.

He came to the Celtic Studies department at Manchester University in 1960 and took charge of its revival. In 1980 he was appointed Professor of Irish at the University College of Wales, Aberystwyth. He also taught in Liverpool, Canada and Germany.

It was said he spread the Celtic gospel across the world, with the zeal of an early Irish missionary. Like them he believed passionately that knowledge and learning were not just for within the walls of universities and he his fondly regarded  for his public evening classes, his talks at the College of Adult Education, and his many keynote talks at the National Irish Studies Conferences and the Irish World Heritage Centre. In fact he was the very first keynote speaker at the inaugural National Irish Studies Conference in 1988 and contributed many times since.

He was always willing to help and support the Irish community and in the early 1990 when we published a magazine called Irish Heritage he contributed a regular column on Irish words common in the English language.  Sometime later he was flying to Galway University when he got stranded in Knock and was forced to find lodgings for the night. A couple of hours later the landlady told him he had a phone call, he was surprised as he had told no one of his location and was not even sure of it himself. The call was from a local Irish language group meeting that evening and they asked him to come and give a talk. He of course was pleased to be asked and took along some copies of Irish Heritage. One of which ended up in the hands of Joe Beirne a local radio presenter. As a result his column was serialised  by Mid-West radio, the largest regional station in Ireland.

One of my lasting memories of Emrys is of his love of Celtic poetry.  I remember him reciting an Irish poem with Welsh power and passion and he paused very dramatically, and then gave the English translation after which he smiled and said I can translate the words by not the poetry.

Emrys was a man of great learning. A speaker of Welsh, Irish, Manx, Scots Gaelic and some Breton and Cornish. He was versed in poetry, literature and ancient mythology. He was always happy to share his learning and spread the heritage of the Celtic people.

Emrys will be deeply missed by us in the Education Group and all the Irish community. 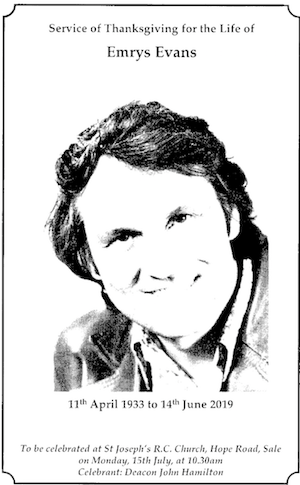